One of the good things happening on public paths locally is a spurt of signing by Kirklees. Sadly some people can’t resist taking liberties with public property. The sign on Holmfirth Footpath 195 (above) has been elbowed down it’s pole and is now rather overshadowed by a popular estate agents sign recently attached to the signs pole.

Up at Sandy Gate the brand new sign erected by Kirklees in December 2017 has joined the ranks of it’s numerous predecessors at this location and inexplicably “disappeared”.Perhaps there’s some Yorkshire equivalent of the Bermuda Triangle thing going on up there?

And last but not least a Footpath sign that has stood unmolested for a quarter of a century or more marking the start of Holmfirth Footpath 159. Mysteriously a sign that hasn’t moved for decades has now slipped down it’s pole and sports a much more helpful bright yellow sign to a nearby development in a very soggy field with the strange name of named Vicarage Meadows. 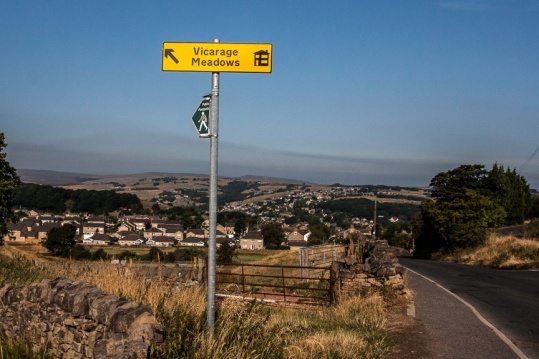